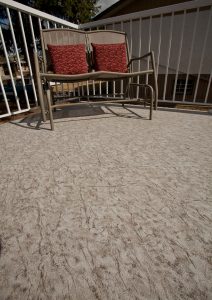 If you read the news at all, you’ve likely noticed a dramatic increase in the number and severity of deck failures in North America. Unfortunately, too many homeowners don’t check their deck for safety, or ignore the warning signs. Here’s how to prevent a vinyl deck failure:

You wouldn’t drive a car that didn’t feel safe, so why use a deck that doesn’t either? If you don’t know whether your vinyl deck is safe or not, then it’s time to do a self-inspection, followed by a professional one if you detect any irregularities. Many small problems can be corrected before they become larger (or life-threatening) issues.

Vinyl decks (and their wood substructures) don’t last forever, as much as we would like that to be the case. In fact, over 25 million decks are now over 20 years old, approaching the end of their lifespan (or at the least requiring a retrofit). And that’s only the ones that were built under permit – there could be millions more that were built and never inspected for safety.

The closer a deck gets to the two-decade mark, the more vigilant you’ll want to be in looking for possible issues. At the very least, find out if a) your deck was built according to building codes at the time and b) if there’s anything you can do to improve deck safety by making improvements. Keep in mind, building codes and materials change, so there are new and improved ways to make your vinyl deck safer.

A Few Minutes per Year

Checking to ensure your vinyl deck is safe doesn’t take long. Just a few minutes once or twice per year is all you need. Look for the following:

You can find extensive checklists online that will tell you exactly what to look for to ensure a safe vinyl deck. If you’re not confident in your abilities, find a contractor to help you – it’s worth the fee.

Any potential safety issue with a vinyl deck should be taken care of a soon as possible. Going into winter with an unreliable deck means dealing with increased loads (snow) that could cause further damage and potentially tear the deck away from your home’s structure. In spring/summer, loads are varying as people come onto/off of the deck and any moisture that lands on the deck could cause damage to your home.

Even the smallest issue could potentially become a disaster, or cost you a significant amount to repair if ignored.

Even older decks can benefit from a facelift with a new vinyl surface. Besides looking great, the vinyl creates a waterproof deck surface that will protect the underlying structure from water damage, which should in turn extend the life of your deck.

So, before the snow falls (and even if it has), get out there and check your deck. Next, start planning to add a vinyl deck surface to your deck for long-lasting protection.